7 Reason to Avoid Go-daddy for Your Domains and Hosting

If you’re looking to start a blog or a website you’re more than likely going to need to buy a domain name and maybe even a web hosting plan.

In this article I’ll discuss why you should avoid Go-daddy, as well giving you my personal recommendation on who I use.

In case you’re not sure what a domain name is, it’s basically the name of your ‘address’ on the internet. Just as your house has an address so that people can find you, your website needs an address too.

It’s usually followed by a suffix such as  .com  .net  .co.uk  .org  or any one of an increasing number of other suffixes. Some well known examples of domain names are Amazon.com or Google.com

If we go back to our analogy of your house. As we’ve already established, your web address or domain name on the internet is a bit like the address of your house, it’s a way to identify you and find you. However, just having an address is not enough.

In order for you to live at your address you also need a house to live in. The same is true with your website.

Your website also needs somewhere to ‘live’ on the interent. In other words it needs a physical place to store the information on your website.

That’s where hosting comes in. In order to ‘host’ your website you need a special computer called a server which ‘serves’ the webpages when someone looks for them on the internet.

Since servers are quite expensive to buy and run, and since you need a good level of technical skills to maintain them, most people buy web hosting from a hosting service provider.

Before you dive in and buy a domain name or web hosting there are a few things you need to know.

The reason is that not all domain name and hosting providers are the same.

One of the biggest names out there is Go-daddy, and they do have the largest market share. However, the reason they are so popular isn’t because they are any good, it’s because they spend A LOT of money on advertising.

I’ll be honest here, personally I’ve never used them. However, the horror stories I’ve heard from other people made me realise it was a wise decision not to use them.

What you should know about Go-daddy

They often do cheap deals to get you in the door. However, don’t be fooled by this.

Firstly, their ‘deals’ sometimes aren’t even that cheap.

To be fair it isn’t just Go-daddy who do this. Most domain name providers will give you a cheap deal in the first year and then bump the price up in the second year. However Go-daddy are one of the worst for significantly increasing the price.

You have been warned!

You can certainly get better deals than this elsewhere (more on this later).

Secondly, if you do fall for one of their ‘deals‘ there will be endless upsells to try and get you to buy more services, or upgrade to a better one. If you’re new to the site, their checkout procedure is so confusing that you could easily up with services added on that you didn’t want.

That’s not the only problem either.

Go-daddy are notorious for charging for services that other providers give for free.

Since you’re already paying over the odds anyway, you have to ask, WHY ON EARTH ARE THEY CHARGING YOU FOR FREE SERVICES?

For example, Go-daddy charges $9.99 for WHOIS domain privacy. Whereas with some other domain name providers it’s included free within the price of the domain name.

You’d think that if you’re paying all that money at least you’d be getting decent customer service, right?

Their customer support is terrible.

To be fair, it has improved in recent years after lots of complaints. However, it’s still not what you’d expect for the price you’re paying and there is much better service to be had elsewhere at a lower price.

If you’re thinking of buying hosting with them, don’t.

One of the things that you really need is a website that loads quickly. This is important since most internet use today is done on mobile devices. A slow website will load even slower on mobile, and if it doesn’t load fast enough people will just leave before the first page loads.

You’d think with all the money that you’re paying on their expensive hosting plans you’d get a great service, but again you’d be wrong.

It’s certainly not the worst by any means, but there is much better value to be found elsewhere.

As I just mentioned, sites need to work well on mobiles.

For that reason, if you use Go-daddy’s website builder they will turn your site into mobile friendly version whenever it gets displayed on a mobile device.

In theory this is a great idea. Unfortunately the version they serve up on a mobile is not as good as the desktop version, so you end up with a dull and uninspiring website which isn’t very appealing.

If you go for a hosting plan, most companies will give you a common industry interface such as c-Panel or Plesk to manage your hosting. Along with that you’ll get a bunch of tools for free.

You’d expect Go-daddy to to do pretty much the same, but they don’t.

Instead they have their own purpose built interface, and instead if giving you something useful to mange your hosting, the main purpose of it seems to be try and sell you more stuff.

By this point you’re probably starting to see a pattern here. They clearly don’t care much about their customers and the main focus seems to be to extract as much money as possible from you… Which leads quite nicely onto my last point.

7) Lack of ethics and sound judgement

Go-daddy seem to have forgotten they are web services provider and it appears their ad campaigns are purposely designed to push the boundaries as far as they can. Their Superbowl ads in particular have caused outrage amongst animal right’s activists and women’s groups for their controversial content.

A few years ago Go-daddy gave their full support to two controversial pieces of US legislation known as SOPA and Protact IP.

On the face of it these bills were supposed to protect the internet from rogue users.

However, the legislation was so badly drafted that companies like Youtube or facebook would have had to shut down their entire site if just one single person posted content that infringed on someone else’s copyright.

The legislation was also seen as an attack on free speech on the internet and would have given the government powers to control the internet in much the same way as regimes like China do.

It would also have fundamentally changed the way the DNS (Domain Name Server) system works and would actually have made the internet less secure. You could quite easily have been re-directed to a fake site without you even realising.

Because Go-daddy gave their support to this legislation a post on Reddit encouraged Go-daddy users to take their business elsewhere. In the week that followed, over 50,000 users (including Wikipedia) left Go-daddy.

Eventually Go-daddy decided it was a mistake to support the legislation and back tracked, but the damage to their reputation was already done and they were seen by many as not respecting privacy concerns or freedoms.

The controversies don’t end their either.

Years earlier the original CEO and founder of Go-daddy, Bob Parsons, sparked outrage when he released a video of himself killing an elephant. What angered people even more was that afterwards he wasn’t the least bit sorry and was seen smiling.

He did explain himself later as to why he killed the elephant, and I’ll leave you to read his account and make up your own mind.

A better alternative to Go-Daddy

I did say at the outset that I would give my own recommendation on a better service.

If you are just looking for a domain name then Namecheap is my top pick.

As the name suggests you can get a domain name that won’t cost the earth and they are generally recognised as one of the cheapest domain name providers.

Even though they are cheap, the great thing about them is that they will throw in WHOIS privacy for FREE.

This is an offer you can’t refuse especially when you consider that Go-daddy is going to charge you $9.99 per year for this on top of the cost of your domain name.

The user interface is reasonably straight forward and they aren’t constantly trying to upsell you all the time either.

Click here to find a domain name on Namecheap

Although Namecheap are good for domain names, it’s generally a good idea to get a different provider for your hosting. The reason for this is that if you have a problem with your domain name and hosting company, you aren’t holding all your assets in one place.

I’ll probably write a separate article on hosting as it’s a subject of it’s own, however if you’re just starting out and you don’t want to spend anything on hosting there is a good option available for free.

They don’t have the same flexibility as a normal hosting company if you’re wanting to do some of the more complicated things in the backend, but for most people it’s certainly worth a look.

You can easily create your own mobile friendly website on their platform by using drag a drop templates which you can then edit with your own text and images. They have tutorials which show you how to do this.

Alternatively, if you’re a bit more advanced, you can build a site from scratch using their web editor. It can be a bit tricky at first but once you the hang of it, it’s not too bad.

Groove is quite new and they are still developing some of the features but overall it’s very good considering that it’s free.

The great thing is that because it’s new, they have built it with the very latest Google updates in mind. This means that sites built on Groove are not only fast, but the are also SEO (Search Engine Optimised) for Google. This is important if you want to get noticed on the internet.

In fact, basically anything you can think of that you might need to start an online business is offered by Groove.

If you are just starting out and you don’t even want to pay for a domain name, you can get a free groove sub domain name. Of course it won’t be quite the same as if you had your own domain name but what do you expect for free.

If you’d rather have your own domain name instead of a Groove sub domain, you can buy a domain name from Namecheap and then link it to your Groove website.

To find out more about Groove please read this other article… 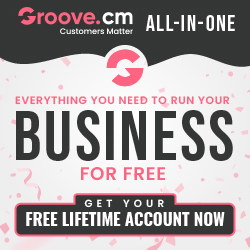